It’s winter time, so that means winter weather for the aviation community.  For single engine piston pilots, that means dealing with icing conditions.  For us Texan flyers, ice only presents an issue for maybe a week out of the year (the exception being for those Panhandle residents!), but it’s nice to have some protection. Most […]

It’s winter time, so that means winter weather for the aviation community.  For single engine piston pilots, that means dealing with icing conditions.  For us Texan flyers, ice only presents an issue for maybe a week out of the year (the exception being for those Panhandle residents!), but it’s nice to have some protection.

Most single engine pistons do not come with ice protection from the factory and, of those that do, most are not Flight Into Known Icing (FIKI) approved.  The systems are “get out of jail” systems that can reduce the amount of ice you pick up if you accidentally get into icing conditions and you are on your way out.  The Cirrus SR22 line of aircraft has had the TKS system option since 2006, with the new FIKI system being available since 2010.  The Cessna TTx has a FIKI option that was debuted in 2014.

The above mentioned airplanes use TKS systems.  There are a handful of single engine pistons that use boots that are FIKI certified:  the Piper PA46 line (Malibu, Mirage, and Matrix) and the Cessna P210 and T210 line (though not all are equipped with boots).

If you find yourself flying into wintry conditions often and want some protection for your clean wing airplane, there are some aftermarket options for a lot of airplanes now.  Do note that all these systems do come with a pretty hefty price tag, but can be worth it if you fly into icing a good bit.

CAV Ice Protection is a TKS system outfitter.  What is TKS fluid?  According to Flying Magazine:

“TKS systems dispense an ethylene glycol-based fluid with a freezing point below minus 70 degrees F through porous titanium panels attached to the leading edge of the wing and empennage. The fluid is released through thousands of the panels’ laser-drilled holes, which are not much larger than the size of a human hair. As air flows over the wing and empennage, it disperses the fluid, coating the surfaces, and preventing the formation and adherence of ice.”

The advantages of a TKS system are the whole entire wing gets coated to get rid of any extra ice that adheres to the top or bottom of the wing surface.  The disadvantage is there is only a finite amount of fluid, so when it runs out, you don’t have any more protection.  The fluid also adds extra weight agains the useful load of the airplane. 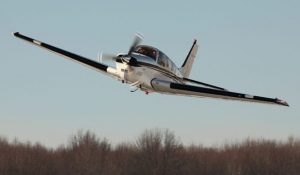 Ice Shield is another after market de-ice option.  Ice Shield makes boots for wing leading edges.  The advantage of boots is they activate instantaneously, getting rid of ice where it builds up first, on the wing leading edge.  No running out of fluid and only the added weight of the system.  Ice Shield also offers heated windscreens for several the Piper Saratoga line and the A36, B36, and G36 Bonanza line.