Looking for an airplane with more seats, more useful load, and good speed?  Look no further than the PA-46-310P Piper Malibu.  It feels like a corporate airplane, but this turbo charged piston single is good owner/pilot airplane for taking the family on vacation or using on business trips. The original Piper Malibu, which was manufactured […]

Looking for an airplane with more seats, more useful load, and good speed?  Look no further than the PA-46-310P Piper Malibu.  It feels like a corporate airplane, but this turbo charged piston single is good owner/pilot airplane for taking the family on vacation or using on business trips. 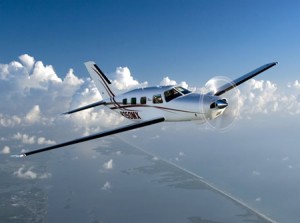 The original Piper Malibu, which was manufactured between 1984-1988, is a great next step airplane for Cirrus owners, Saratoga or Lance owners, and Mooney owners looking to move up to a pressurized, 6 seat piston.  The pressurization has got to be one of the best parts of the Piper Malibu.  The ability to climb up to the low flight levels (the service ceiling is FL250, but the airplane performs great between 16,000 and FL190) to catch better winds and get a better true airspeed (the airplane gains about 2.5 KTAS for every thousand feet) without having to wear oxygen makes the ride much more enjoyable.

Equipped with six seats and a 4,100 pound gross weight, the Piper Malibu allows for a lot more carrying ability than a Cirrus or even a Saratoga.  Now, like most piston airplanes, you can’t take 6 average adults, bags, and full fuel, but here’s the great part:  the Continental TSIO 320 only burns 16.5 GPH in cruise at 75% power.  The plane will still fly 200 KTAS at 16.5 GPH.  With 120 gallon capacity, even taking half tanks still allows for a 2.5 hour range with an hour reserve.  At 200 KTAS, that’s 450 miles.  And, you gain an extra 360 pounds useful load at half tanks.  That’s not too shabby. 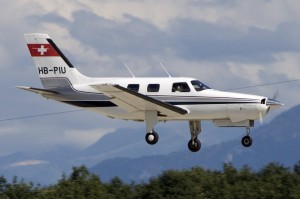 The Piper Malibu was designed to be comfortable, fast, and be able to carry some baggage.  There are two baggage compartments, one in the nose behind the firewall and one in the rear behind the rear seats.  The nose baggage is wide enough to fit golf clubs in, while the back baggage is large enough to fit rolling suitcases in (the front baggage has no problem with roller bags either).  Lots of weight in bags?  Again, no big deal.  Just plan on taking less fuel and still flying for 2.5 hours.

From a pilot’s standpoint, the Piper Malibu is a pretty straightforward airplane to fly, though it does require some specialty training.  A lot of PA-46s on the market right now have upgraded glass panels and digital engine monitors, making piloting the airplane that much more streamlined.  Most Piper Malibus are equipped with the KFC 150 autopilot.  Some have a yaw damper installed, others don’t.  Some have the vertical speed and altitude capture installed, others don’t.  It just depends on that specific airplane.  They aren’t like a Cirrus where they are all made the same.

Looking to upgrade to something with more seats, a higher service ceiling, but not a significant increase in fuel costs?  Look into the Piper Malibu.  You can get one in good shape from about $300,000.